Cut of the Ears of Winter 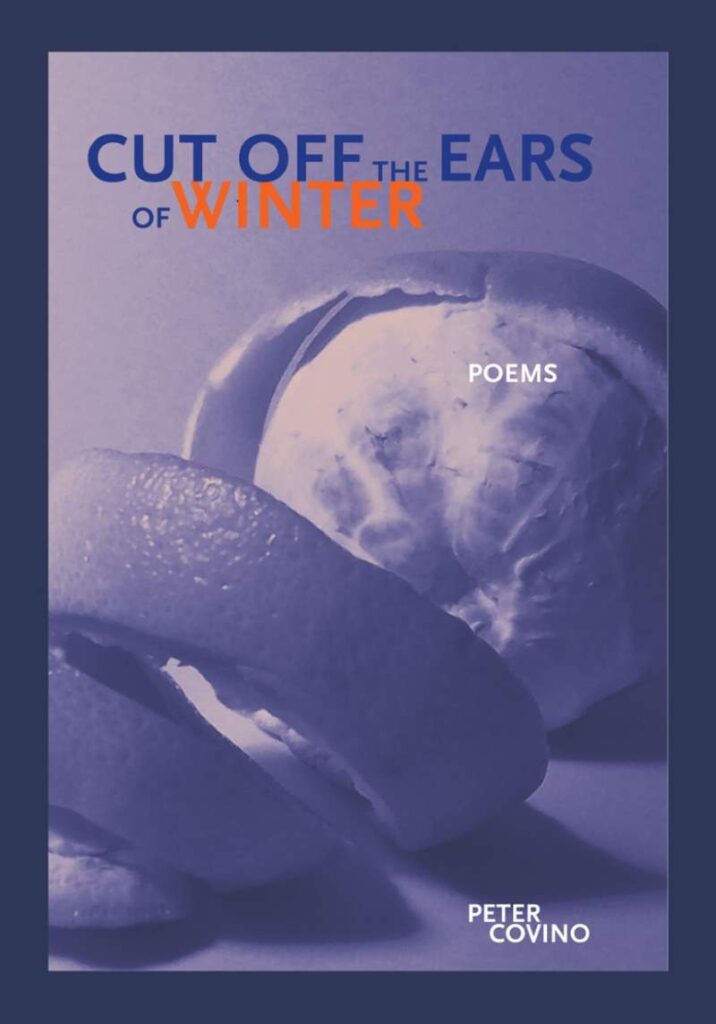 more poetry by Peter:
The Right Place to Jump

Winner of the PEN/Joyce Osterweil Award for Poetry

“Images of real and symbolic violence ricochet and reflect off each other in this elegant and disturbing collection. The poems chronicle, among other things, a history of childhood abuse and its after effects, but in a larger sense, they also explore through the lens of myth, art, religion, and popular culture, the underlying and often unacknowledged brutality beneath even mundane events.”
– from the judges’ citation: PEN/Joyce Osterweil Award

“Pathos is the imp of innocence, and in Cut Off the Ears of Winter Peter Covino deploys him over the entire outraged body of modern harms. Here are psalms against the sinister. Here, too, are eclogues of mercy. Everywhere, in every notch and corner, in every kiss, crease and cicatrix, Covino’s imp appears and proves these poems true. This is a book of virtues better far than our deserving.”
– Donald Revell

“These poems are acts of discovery. They deal with tough, seamy, risky—what academics now call ‘transgressive’—subject matter. There’s a strangely exhilarating desperation in most of these poems that’s compelling. [Covino] uses words as a medium, as materials, not as descriptive or narrative vehicles. I also like the angular, unsettling humor threaded into nearly every poem.”
– W.S. Di Piero, Bordighera Prize Finalist Citation

“Peter Covino’s first book is spacious, wonderfully unpredictable, and insistent on ambition and scope. Cut Off the Ears of Winter is not simply an autobiography but a poetic autobiography. It moves from the confessional— stories of the body and the family—to stories of the mind, art, and history. Especially compelling is the way in which the intimate biographies of flesh and family are entwined with and inextricable from matters of art and history. On a painting of Judith and Holofernes, Covino writes ‘. . . he of the familiar scowl— / these jealousies overwhelm me . . . / and I cannot say for sure / whose severed head she holds.’ Restless, worldly, intelligent, and beautiful, Cut Off the Ears of Winter is an utterly original first work.”
– Lynn Emanuel

“So many of these poems make it their job to get around experience, to get it all in, to comprehend it. So often, in what Covino calls ‘a love letter for our lifetime,’ they cannot contend, however intrepid, with such totality—’a closure that resists us’—and it is at such points (or periods) that I hear this new poet’s particular note. When he asks, ‘How can we explain the pieces of detail, vanishing,’ then I hear Covino’s special lacrimae rerum note. It is new to me and noble.”
– Richard Howard

“Peter Covino’s debut book of poetry, Cut Off the Ears of Winter, is a haunting work of desperation, abuse, redemption, and beauty. The brutality and conflict of what is at stake in these lyrical poems is rarely addressed in the foreground of the narrative. Instead, it lurks in the background of what is said. Covino’s minimalist diction, conversational voice, and simple albeit effective imagery results in a personal and humanistic sense, which is easily related to. Covino handles the lyrical narrative masterfully . . .”
– G. Von Bourdeau, Pebble Lake Review